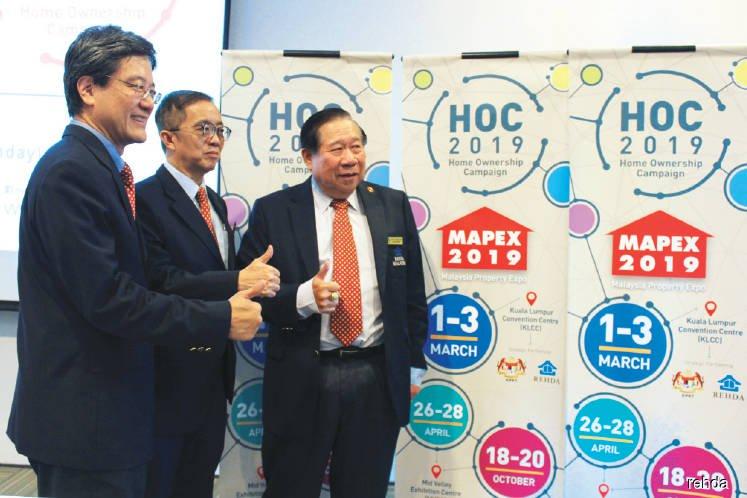 
The Real Estate and Housing Developers' Association (Rehda) hopes that the Home Ownership Campaign (HOC) 2019 — from Jan 1 to June 30 — will see total sales of at least RM3 billion, president Datuk Soam Heng Choon said in a media conference on Feb 25.

He explained that the target is based on the sales of RM2 billion to RM3 billion achieved in previous HOCs. There were two HOCs earlier, in 1998/99 and 2002.

"One need not be a first-time homebuyer, and each person is entitled to purchase one property. People will take time to decide and confirm their pur­chases … but for the entire campaign period, I think we can achieve RM3 billion to RM4 billion in sales," said Soam.

A collaboration between Rehda and the Ministry of Housing and Local Government (KPKT), HOC 2019 is aimed at encouraging more home ownership among Malaysians.

During the campaign period, all homebuyers of participating projects will receive a minimum discount of 10%. Furthermore, the stamp duty on the instrument of transfer for properties of up to RM1 million and on loan agreements of up to RM2.5 million will be waived.

The HOC 2019 Expo, from March 1 to 3 at the Kuala Lumpur Convention Centre, was launched by Prime Minister Tun Dr Mahathir Mohamad. More than 17,000 housing units valued at RM11.8 billion were on offer.

Organising chairman Datuk N K Tong said 51 developers participated in the exhibition, offering various types of properties, from affordable homes priced at below RM300,000 to houses of up to RM1 million each.