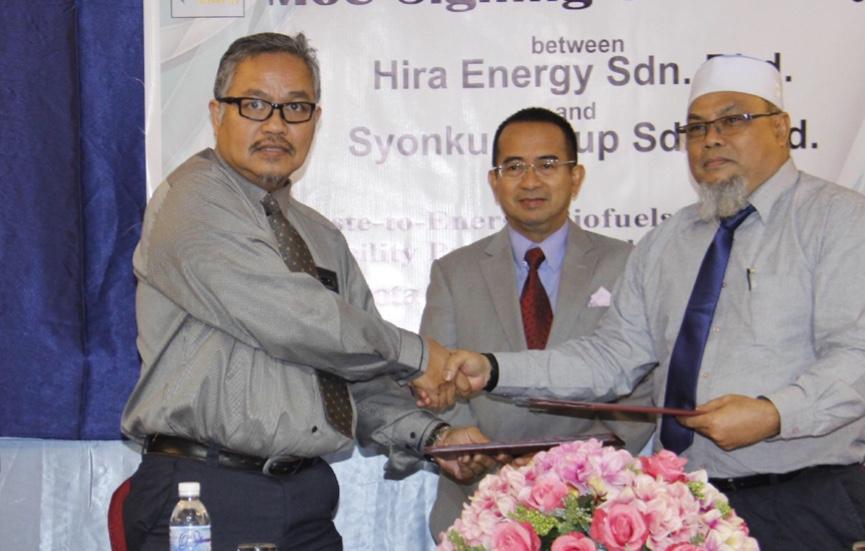 Project to Convert Waste Into Energy in Semporna


Sabah-based Syonku Group Sdn Bhd inked a Memorandum of Understanding (MoU) with Hira Energy Sdn Bhd to collaborate in building a pilot facility project that converts waste to energy and biofuels in Semporna.

Syonku Group director Hasai bin Tudai believed that the project would be the first-of-its-kind in Malaysia and the third in Asia, after Thailand and Indonesia.

Construction of the plant is targeted to start early next year with an estimated cost of about USD15 million.

"The facility enables solid waste, except for rocks, to be processed into biofuel and energy" he said at the signing ceremony on Wednesday, 11 July.

The ceremony was witnessed by Assistant Minister of Trade and Industries Azhar Bin Datuk Matussin.

Established in 2015, Syonku Group is a Petronas licensed vendor which involves in oil and gas projects, engineering and unmanned aerial vehicle (UAV), or drones.

Meanwhile, Hira Energy, a company based in West Malaysia, is the patent holder of the American technology to convert waste to energy and biofuels.

Hasai said Semporna was chosen as the location for the pilot project because it was a tourist attraction, adding that the initiative would also create job opportunities.

He said the company would liaise with Sabah Electricity Sdn Bhd (SESB) to sell the energy generated from the facility to the latter.

He also hoped that the State Government would support this project.

On the other hand, Hira Energy regional representative for Asia and Oceania, Muhammad Yani AS said the pilot project was planned in Semporna because it was a resort island and tourism destination.

He said the project would focus on turning waste from hotels, resorts and beaches into energy and biofuel.

Muhammad added that the success of the project could potentially boost eco-tourism in Semporna.

He said the first phase of construction of the facility was targeted to commence in early January next year.