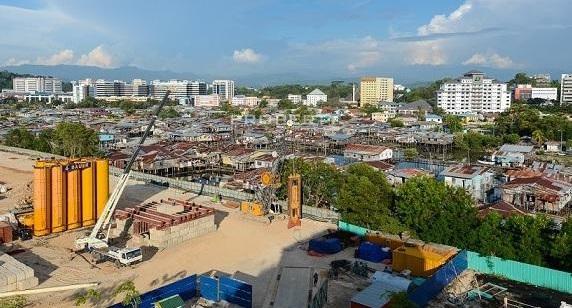 A total of 1,133 people were left homeless after 147 houses were razed by fire at Kampung Gas, Batu Sapi (Sandakan) on Wednesday afternoon, 27 June.

According to Jaujan, the fire incident was unfortunate, but what was even more worrying was that such a tragedy was a common incident in Sabah.

He said that as a new government, he was going to come up with plans to manage the squatter settlements in Sabah to avoid such a tragedy from happening.

Homes at squatter settlements are typically built too close together which has caused them to be not safe.

"We put it as one of the priorities to provide a home for Sabahans, but it involves a huge allocation so we need a good plan for this. We are concerned about the welfare of the people, but even residents in more developed countries such as England and Singapore do not provide free houses for its people. It is going to take time but I will come up with a plan for this.

"As for the victims here, we could not provide them with homes immediately, but we will look into a more comfortable shelter for them to live temporarily because the students need to utilize this school building. They could not stay here for long. We have provided them with food and clothes to help ease their burden. We are all very thankful that such a tragedy did not involve any casualty" he said.