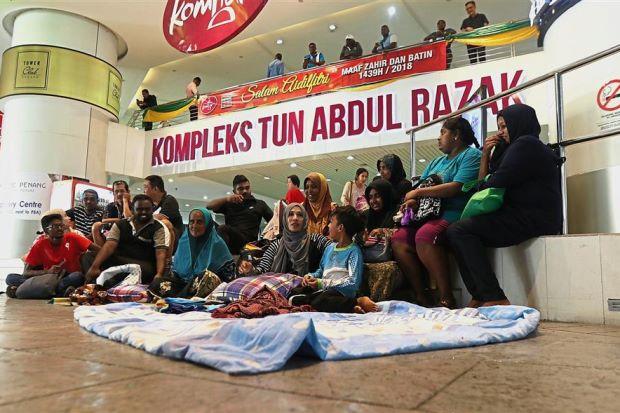 Evicted Residents No Longer Qualified to Stay There

GEORGE TOWN: With a waiting list of 1,800 applicants for people's housing projects (PPR), Penang Chief Minister Chow Kon Yeow said those who are no longer qualified for this housing should vacate the property.

This is after seven families were evicted from their homes at the PPR flats in Rifle Range on Tuesday (June 5) by enforcement officers, who then locked up the premises.

Five of the families have resorted to "camping outâ€ at the state administrative building in Komtar today while staging a demonstration with placards, asking for the locks to their former homes to be opened.

Responding to the matter, Chow said enforcement action actually began six months ago, but they were given a six-month extension to look for alternative housing after they appealed.

"The issue (now) is that they no longer qualify to occupy such units, either because their income level has exceeded the requirement or because of foreign spouses, or because of the arrears (of rent).

"There is a clear cause of action taken by the state housing department according to their guidelines.

"These residents were found to no longer comply with the guidelines to continue staying there" he said in a press conference today (June 6) in Komtar.

According to the Penang state government's website (erumah.penang. gov.my), PPR flats are meant for households earning less than RM1500 monthly, or a husband or wife, who earns not more than RM750 monthly.

He said it is unfair for other applicants who have to wait for their turn when other residents who have lost their qualifications to the housing are still occupying the units.

"There are 1,800 applicants waiting in line to occupy such housing units in Padang Tembak (Rifle Range)" he said.

On Tuesday, Parti Sosialis Malaysia central committee member R. Karthiges and another activist were detained by the police for trying to obstruct the officers. They were released on police bail last night (June 5).