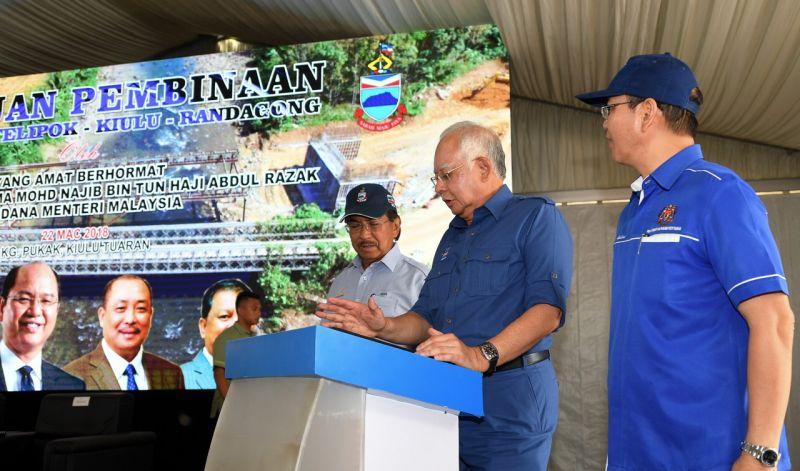 Telipok-Kiulu-Randagong Road Project Set to Be a Game Changer

The Telipok-Kiulu-Randagong Road project is set to be a game changer in Sabah particularly in boosting tourism for the surrounding areas, according to Chief Minister Tan Sri Musa Aman.

"This is not simply about building and upgrading the existing roads; it will be a catalyst for economic growth in line with ongoing developments in the area" he said during a project site visit by Prime Minister Datuk Seri Najib Razak at Kampung Pukak, Kiulu on Thursday, 22 March.

Completion of the 60-kilometre project costing RM288 million is expected to be the end of March next year, but construction is already 65 percent or 20 percent ahead of schedule.

Meanwhile, Musa said Sabah had been the recipient of various development initiatives costing billions of ringgit, thanks to a caring and concerned prime minister who wanted to ensure that the people came first in all the government's aspirations.

"We talk about facts and proof and it is not just this project. The prime minister has given allocations for other projects in the rural areas such as electricity supply, housing for the hardcore poor, BR1M (1Malaysia People's Aid Scheme), rehabilitation of run-down schools and the Pan Borneo Highway.

In this regard, Musa reminded the people in Sabah not to be swayed by irresponsible parties that belittled the government's efforts to help the people in the state.

On the prime minister's visit to Kiulu, Musa said it was a historic day for the area, located about 55 kilometres from the city because Najib is the first Malaysian prime minister to set foot on it.