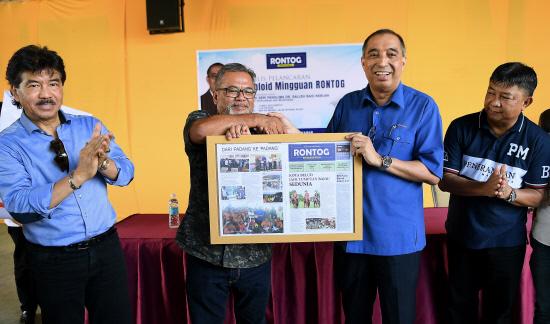 
Kota Belud residents will get the latest information on current developments and government initiatives in Sabah through the publication of the Kota Belud Special Edition Rontog Weekly Tabloid.

The tabloid was founded by Musli Oli who is the editor-in-chief and was launched by Communications and Multimedia Minister Datuk Seri Dr Salleh Said Keruak, on Saturday, 10 March.

Salleh said the Rontog Weekly Tabloid was expected to play a key role in delivering accurate and truthful information to the local community, thus clarifying current issues relating to development and reforms made by the government.

"The publication of the Rontog Weekly Tabloid is timely in ensuring local communities, especially in Kota Belud get accurate information about all the efforts being taken by the government to prevent people from being swayed by inaccurate information being disseminated through social media.

"The publication of this tabloid will give rise to a more mature, intelligent and knowledgeable society in assessing and evaluating the validity of news, whether it is true or false," he said.

Salleh said the government had brought a lot of progress in Kota Belud which clearly changed the development landscape in the area, including in education, agriculture and road infrastructure facilities to ensure comfort and well-being of the people.

Taking the example of road construction in Kota Belud, Salleh said many new areas were created while also giving people the opportunity to develop their businesses, providing job opportunities thereby improving their economy.

In this respect, Salleh said the tabloid would help to shed light on all government developments in the real context, thus repudiating all inauthentic news about the government on social media.

A total of 2,000 copies will be published weekly and distributed free to the local people.