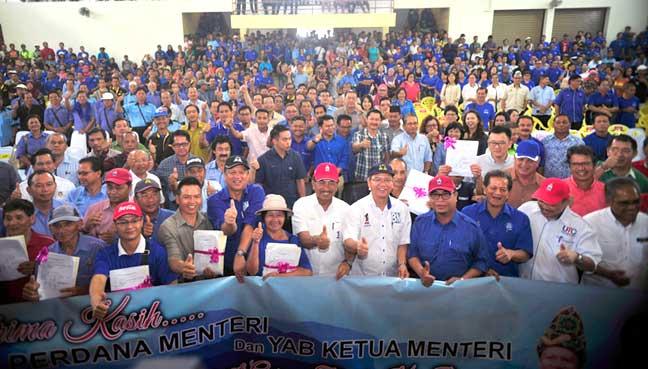 Kiulu Will Become “Game-Changer” for Tuaran

Kiulu assemblyman Datuk Joniston Bangkuai said the elevation of Kiulu as a sub-district in Tuaran on Tuesday will be a "game changerâ€ for the constituency that recorded a healthy visitor arrival of 54,000 last year which was twice the number recorded two years earlier to the area popular for its white-water rafting activity.

The elevation will put in place a foundation for the area to be further developed as a rural tourism attraction and boost its economic potential.

"By becoming a sub-district, we will have an assistant district office and a government administrative centre that will look into the needs of the people from the surrounding area" he said of the constituency which has over 100 villages.

Joniston said the issuance of over 1,000 Native Land titles to residents from four villages within the constituency, Kampung Lokos, Kampung Nulu, Kampung Tiong Ratau and Kampung Tiong Simpodon, would also mean the people would no longer have doubts about the land they live on for generations, from the time of their forefathers.

"The Native Customary Rights Land is considered as â€˜life' for the people here. Many have waited long for these titles to â€˜extend their lives'. It's our life as the sons of the soil and we no longer need to worry or doubt the status of our ownership to the land here.

"On behalf of the people I sincerely thank the Barisan Nasional leadership under Tan Sri Musa and the Land and Survey department in expediting the issuance of the titles. It means a lot to the people of Kiulu" he said during the ceremony where Musa handed over the titles to over 1,000 recipients of the titles issued under the Sabah Native Land Services programme.

Joniston said the BN government has big plans for the nation and Kiulu will not be left out because it is represented by a representative from the coalition that has brought much progress and development all these years, apart from having a united front made up of fellow leaders who work as a team.

Joniston said he once asked Datuk Seri Wilfred Madius Tangau, the Tuaran Member of Parliament, for help in a request from a village to build community centre.

"He immediately approved my request. The same goes for our Local Government and Housing Minister Datuk Hajiji Mohd Noor who represents the adjacent state constituency of Sulaman under Tuaran who has always helped me.â€ "I am grateful I can always depend on the two veterans to help me out. They have made my work easier because of the strong cooperation we have" he said.