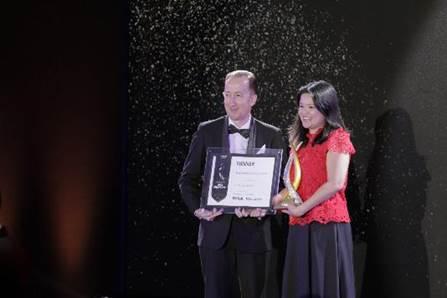 
SINGAPORE: The PropertyGuru Asia Property Awards 2017, presented by Kohler, has finally reached its grand finale as the best in Asian real estate from Sri Lanka to Macau were honoured at the biggest and most respected industry awards gala presentation held on Wednesday evening (8 November 2017) at the Sands Expo and Convention Centre at Marina Bay Sands in Singapore.

It was a glittering culmination of the year-long competition that started in Cambodia, journeying across Asia over the past year, and with Singapore's domestic winners announced the previous evening.

The event recognised real estate industry excellence across Asia, based on the careful assessment of an independent grand final jury comprising the 11 chairmen and woman of the Asia Property Awards.

Freshly-crowned Singaporean champion GuocoLand, developer of the award-winning integrated development Tanjong Pagar Centre, was hailed the Best Developer in Asia for being a leader in urbanisation, mixed-use public spaces and sustainable development.

"One of the Singapore's leading developers, GuocoLand believes that every project should possess â€˜poetic ambience' and offer a lifestyle that's comfortable and usable. GuocoLand achieves its goal by incorporating well-designed public spaces, sustainable and green amenities, and choosing the most premium locations for the benefit of consumers" the grand final jury said.

Singapore's former master architect-planner Dr Liu Thai Ker, who gave the opening remarks to the two-day PropertyGuru Asia Real Estate Summit that preceded the grand finals, delivered the keynote address to inspire developers from around the region, which boasts some of the world's most dynamic property markets with fast-growing urban population and migration.

"As an architect-planner, it is my belief that just as no man is an island, and no property project is an island. Projects function and look better if they are well integrated with the urban fabric" he said, encouraging developers and governments to promote quality housing, reliable infrastructure and integrated communities that can support growth.

Now in its seventh year, the 2017 grand final event also served as an introduction for the next stage of the PropertyGuru Asia Property Awards, which will be joined by developers from Japan and South Korea. Sri Lanka's inaugural domestic gala dinner in Colombo has already been set in July 2018. The entire judging process was strictly supervised by BDO, the world's fifth largest network of accounting and auditing firm, including actual site inspections and intensive deliberations by the independent panel.

Opening of the 2018 Asia Property Award Nominations (Malaysia) Nominations for the fifth instalment of the Malaysia leg of the 2018 PropertyGuru Asia Property Awards programme which is set to take place on 26 April 2018, are now open. There are categories for outstanding developers, residential and commercial properties, and architectural and interior design across various segments. Special awards also await developers that, in the past year, have shown exemplary initiatives in sustainable development, green building, universal design, and corporate social responsibility.