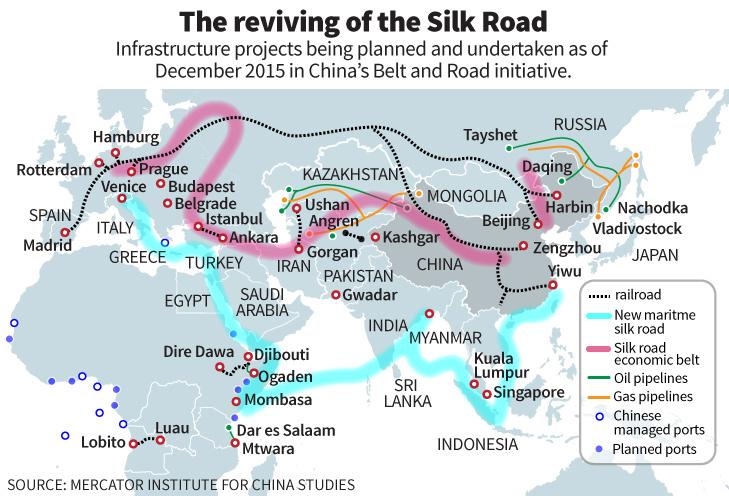 One Belt One Road to Connect 65 Countries Across 3 Continents

China wants to revive an ancient network of land and ocean silk trade routes of centuries past and is instigating an infrastructure building boom across Central Asia up to Europe to help boost trade and improve transport coordination.

China's One Belt, One Road initiative was launched in 2013 and is expected to be the biggest comprehensive global project of the 21st Century, involving 65 countries across 3 continents and affecting 60% of the world's population.

The One Belt, One Road is indeed a massive worldwide project with many roads, railways, ports and maritime routes making up new and revived trade corridors. The land-based projects are the belt. The road is the maritime routes that will connect China's southern provinces to south-east Asia and the east coast of Africa with ports and railways.

Getting the ball rolling

Today in the 21st Century, everyone in the world is facing globalisation, urbanisation and connectivity advancement. Communication is advancing by the day with new mobile applications created every so often. Many countries are also experiencing growth of mega projects in their respective cities.

Connectivity in terms of the High-Speed Rail and other means of transportation hubs have been the central interest of many. Without these hubs, it would be impossible to do cross border trading to neighbouring countries.

Digital payment systems such as AliPay has proved to be a success. Such an advancement in China has made trading almost, if not, hassle free. We are not in the so called 4th revolution, where we are looking into merging the different platforms together.

"We're witnessing the shift of wealth to the Eastern hemisphere. The wealth boat is currently in the Western hemisphere but in the next few years we will definitely see a shiftâ€, said Dato' Sri Matthew Yeoh, Co-Chairman of ASEAN Legal Alliance when delivering his paper on China's One Belt One Road and High-Speed Rail across ASEAN during the ARENA Conference in Kuala Lumpur on Saturday afternoon (26 August).

Within five years, Laos could have hundreds of kilometres of high-speed rail line connecting its capital to the southern China border and the strategic city of Kunming. With Bangkok being it's start and end point, there will be 3 lines running through the different ASEAN cities; Western: Mandalay - Chiang Mai - Bangkok; Eastern: Hanoi - Ho Chi Minh City - Phnom Penh - Bangkok; Central: Southern China cities- Kunming - Vientiane - Bangkok.

The construction of the 414km project got off to a symbolic start last December, with a ground-breaking ceremony in the north of the country. It followed previous stalled attempts to begin construction and a decade of negotiations.