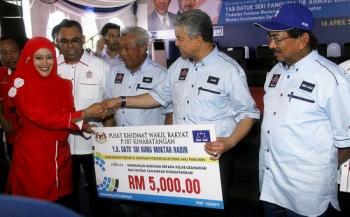 He said Prime Minister Datuk Seri Najib Tun Razak had also stressed on the balance when he said that while mega projects were being implemented, basic infrastructure and amenities for the people in the rural areas, should also be given priority.

"The prime minister is not only committed to implementing mega projects such as the Pan Borneo Expressway, East Coast Rail Line, Mass Rail Transit and the Kuala Lumpur-Singapore High-Speed Rail, but also to providing roads, as well as electricity and water supply in rural areas" Ahmad Zahid said at the launch of Felcra Berhad's Public Relations Programme on Sunday, April 16.

Ahmad Zahid said the implementation of mega projects were needed to boost the economy, but at the same time, the rural areas should also be developed.

He said this was in line with the government's commitment to listening to the voices of the people.

"The voices of the people are being heard by our leadership, hence the implementation of balanced development" he said.

At the event, the deputy prime minister also announced the approval for the construction of 240 units of Rumah Bina Negara (RBN) houses by Felcra Berhad in the Kinabangan and Libaran constituencies.