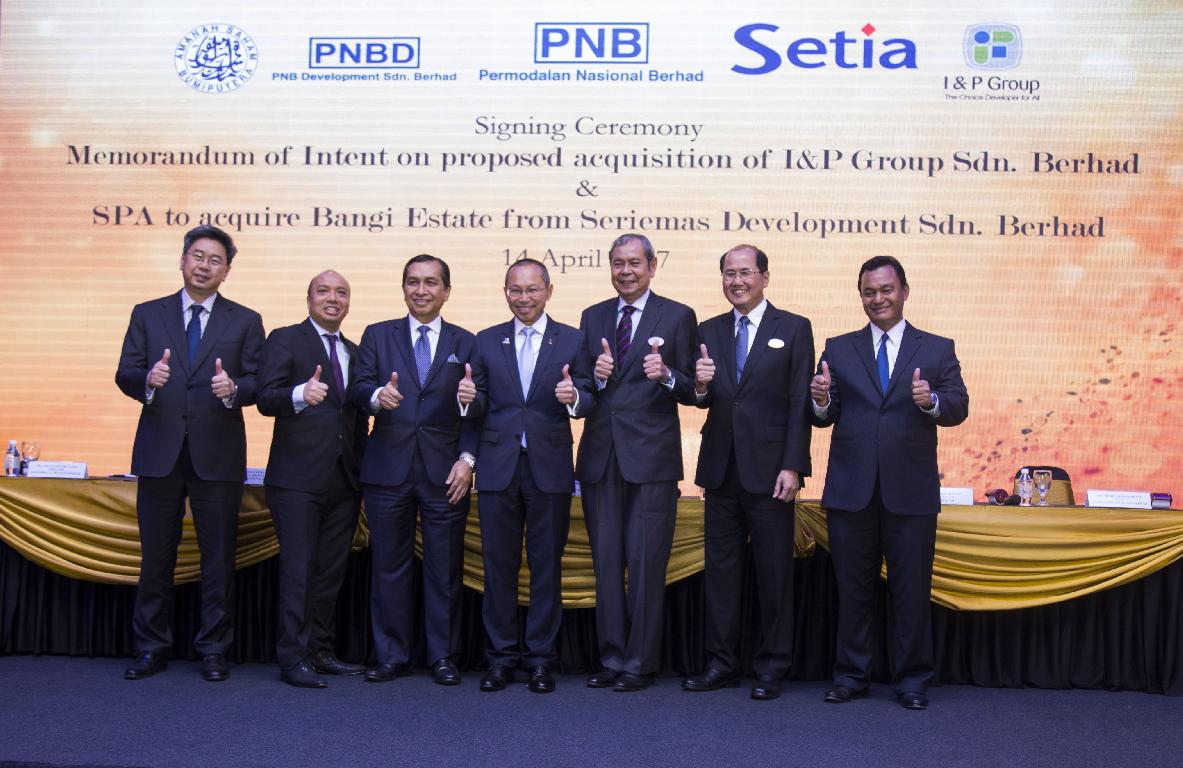 The indicative price for the Proposed I&P Acquisition is estimated to be within the range of RM3.5 billion to RM3.75 billion. However, the final purchase price will only be determined and agreed upon after taking into consideration the necessary due diligence results, the audited net assets value (NAV) of I&P Group which as at 31 December 2016 was RM3.16 billion, and the market value of all the landbanks, on-going projects and investment properties of I&P Group as appraised by the independent property valuers to be appointed by S P Setia. The Proposed I&P Acquisition will be funded by a combination of equity, internally generated funds and borrowings.

S P Setia is constantly on the lookout for opportunities to expand its landbanks and to stay ahead as the leading township developer in Malaysia. Upon successful completion of the Proposed I&P Acquisition, S P Setia will have increased its prime landbanks in Central Klang Valley and Johor Bahru significantly.

"We are truly excited with this corporate exercise embarked upon by our Group. We believe that the acquisition of I&P Group will allow us to tap the synergistic opportunities that I&P Group could offer given that its landbanks are located within the growth areas in the central part of Klang Valley and Johor Bahru, where our Company has charted successes and are a stronghold of its "Setiaâ€ brand. The synergy between S P Setia and I&P Group is obvious. Further, based on information disclosed, I&P Group has a strong balance sheet, with very low debt level, which is an excellent platform to facilitate future growth and executionâ€, said Dato' Khor Chap Jen, President & CEO of S P Setia.

"We also look forward to welcoming the talented team of I&P Group to Team Setia family. We will have a ready talent pool with complementary skill sets to reinforce the enlarged entity, when talent in the market is thin on the groundâ€, added Dato' Khor Chap Jen, President & CEO of S P Setia.

From PNB's perspective, the proposed transaction is in line with its recently announced Strategic Plan to transform the performance of its strategic and core companies as well as rationalise and enhance PNB's property investments. It will also allow S P Setia and I&P Group to enjoy strategic and synergistic benefits through cross-fertilisation of resources, best practices, and technical know-how between the two companies.

The President & Group Chief Executive of PNB, Dato' Abdul Rahman Ahmad said, "As the major shareholder of both companies, we are pleased to see the coming together of S P Setia and I&P Group, two long-standing property brands that have strong track record of delivering value to homeowners and investors. The strategic rationale for the combination is clear and compelling. The two groups' landbanks are in close proximity whilst their respective customer base is highly complementary, which shall facilitate greater value creation. This combination will create the largest property company in Malaysia and one of the leading players, with a total landbank of close to 10,000 acresâ€.

"PNB will be supportive of S P Setia's plans on how best to finance the acquisition and is ready to provide the necessary capital support to ensure the success of the transaction. We strongly believe the combined company will be greater than the sum of its parts. As a long term investor we see this as another opportunity for PNB to enhance shareholders' value and increase future dividend yields for the benefit of our unitholders.â€, Dato' Abdul Rahman further elaborated.