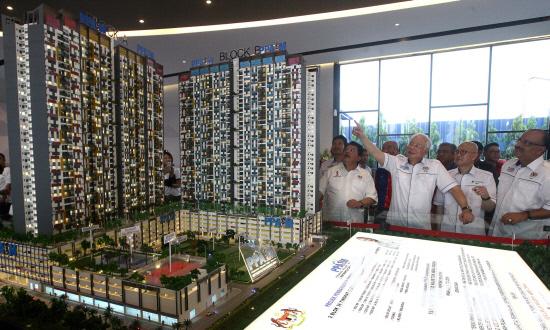 Najib, who is also Finance Minister, said the Government undertook the measure of building the PPA1M housing for personal and family wellbeing with the house ownership offered to public servants.

He said as the pillar of the Government's administrative machinery, public servants were an important target group, not only in upholding and implementing government policies but also as a group which played a major role and contributed a lot to national development.

"It is very appropriate for public servants to get a comfortable home and enjoy an increase in their property or asset value as security for the rest of their lives," Najib said at the handing of keys to the Larai PPA1M units in Precinct 6 on Monday, March 27.

Najib said the provision of affordable homes was a main agenda of the Government with the cooperation of the private sector, and among the schemes were the 1Malaysia People's Housing (PR1MA), People-Friendly Homes, Federal Territories Housing Policy (RUMAWIP), and Felda, Felcra and Risda second generation homes.

He said the Government targeted the construction of 126,000 PPA1M units for public servants throughout the country and so far, almost 3,500 units had been completed and occupied, while the balance was being built.

"God willing, by 2020, all the units targeted will be completed...this is a meaningful milestone towards fulfilling the national housing agenda."

Najib said for each PPA1M unit built, the subsidy provided by the government was RM25,000 to RM38,000, depending on the size of the house.


This article has been extracted from Daily Express.